A Catalog of Works

A little more money here. Another repair there. Wow, just when I though that things were sailing smoothly for Sweet Pea and me another mechanical issue comes up. On Saturday night I went to start her up and surprise! Nothing.
“Okay, well maybe she’s just cold”, I thought. And considering the temperature has been in the 40’s as of late, it was sound reason.  Fast forward another 20 minutes and she’s still not starting.
Sunday morning (Christmas day) I call AAA to get a jump. To my surprise a technician was there within 15 minutes, and not at all grumpy to be.  He was extremely helpful and after the successful electrical boost he even peaked around under the hood to try to locate the underlying problem. Easy: my alternator. It wasn’t holding a charge.
For some reason, Sweet Pea is taking a liking to breaking down on holidays. Maybe she shares the same awkwardness around family gatherings and gift exchanges as many do. I’m now prepared for a scheduled break down on Easter, Saint Patty’s and Memorial Day. Though, we did just make it through Hanukkah, so she must be cool with Judaism.
By Sunday afternoon I have had the ol’ girl towed to a RV repair shop.  It’s owned by the rosy-cheeked, soft-bellied Spanish speaking Osmundo.  This is where she will spend an evening with a motley crew of greasemonkies because though Osmundo assures me that it’s a small problem and I can collect my home in the next couple hours, I decide to capitalize on the opportunity to get some fresh air and head back by bicycle for a 45 minute cruise in which I precariously practice my new trick of riding with no hands.
The next day I pull a long shift at work, delirious from the night before in which I received very little sleep due to too much fun with friends, then hoped back on my fire engine red Bianci and hit the slopes for the shop.  It’s pretty much the last thing I want to be doing at the moment, being so exhausted, but the chilly 4 o’clock air perks my lethargy and I make it to the shop minutes before closing time. I’m warmly greeted by a chorus of blue-suited handymen, then Osmundo teaches me the Spanish words for “alternator”, and “Do I owe you any money back?” while I pass over the scraps of my last paycheck, which was intended to hold me over until the next bit of sustenance. Curiously though, I am not deflated, or even upset about spending the $250. Maybe because it instilled the belief in me that perhaps I have taken care of another one of the big things that at some point would need attention, so maybe, that’s just one more thing crossed off the list…perhaps?
I drive back to where I am keeping her these days in Emeryville, exchange my last $20 for fuel and give her a little drink.
So now I’m about to go out and start her. And with a little luck, she will actually start. I’m working other aspects of the beast, ahem, the beauty.  There are a number of external “booboos” that need some attention, and I want to begin painting the exterior of the cab. I’m thinking a pea color…suitable, no?  At the moment she still has “Big Ugly” penned across both front doors, and it’s doing nothing for her confidence. Time for a face-lift.
Also on the agenda for the next couple days is figuring out the water situation and installing the compostable toilet (an upcoming entry all on it’s own).  When I was staying with Jacqui and Sean I filled up the water tank, but now when I open the faucet only a gurgling noise arrives, no water.  So, I’ve got to try and sort that out so I can at least brush my teeth and wash my hands in there. And once that’s sorted, it’s on to figuring out how to heat the water with the internal water heater for the possibility of a hot shower….ugh, just listing this stuff is wearing me out.  Before I get too overwhelmed, I better get out there and get to work. One project at a time.
at 12:15 PM

Email ThisBlogThis!Share to TwitterShare to FacebookShare to Pinterest
Labels: The RV Experiment 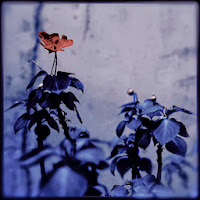 There is nothing more to this moment than me in this chair
Listening to music in a different language
Saturated by distant memories of golden and disappearing sunsets
(Unrequited lust).
There is nothing less to this moment than this.
The fresh blood of these memories sneaking out between coagulated scars.
Reminders that wounds still ache
And pain still feeds off vulnerability.
There is nothing more to this artificial light that hangs heavy in even eggshell color.
The flower of this evening has already bloomed and crumpled upon itself,
Shivering through furrows of thin, pastel skin
Wrapping its cold heart inside the interminable bosom of silk layers
That tear tragically with a weak stroke by a clumsy finger.
Though it is late and
I have nothing more to give to this moment than my tired fingers,
My perception of time
Continually beats against my will to create.
Impassioned protests oppose the thirst for production
Refusing to allow satiation in full…
Instead there is a force
Who wishes to wrinkle me like the weak flower
And crush my bones as if crisp stems of pale green.
It fiddles with my eyesight
And deviously paints the lids with a lead lacquered brush.
I grow ponderous with each tap of the finger
Though simultaneously fulfilled in obstinate victory.
I may fall to the sleep in luxurious languor
But will recount some woes before settling for the moonless scene.
at 1:53 PM

Email ThisBlogThis!Share to TwitterShare to FacebookShare to Pinterest
Labels: Poetry

Jacqui: A Woman of Many Animals

Written: 2/07/2011
Can you tackle the world with the feral fervor of a lioness?
With the purity of a raindrop…
The sharpness of an owl’s gaze?
Can you spread your wings in anticipation of the soar, with the invisible suction of your intellect’s pull and the everlasting rewind of your passion’s exploration?
Can you expose tu corazon like a wounded fighter, with the gush of blood that your pursuit will elicit?
Close your eyes and prop open the door to the waves that crash your bones and encapsulate your fears.
Can you catch a hold of the peacock’s blazing tail to clasp it in your hands made of impermanent presence…
Slipping it’s shimmering feathers into your warm palm, while they burst out and shine through your fingertips…
to illuminate those dreams cast heavy in your eyes?
Speak softly in a bear’s roar, sweetly in a lemon’s twist, and powerfully like an elephant’s lunge.
Can you draw water in buckets from the reservoir of hope that’s buried below your ribs, while letting a bit drip to the needy ones of our planet whose anguishing search leads to the oro precioso your spirit produces?
This gold, its embers are enough to ignite a volcano. It’s whispers supply a world of tongued thought.
You can, my friend, ride the rainbow’s ridge and tame the zebra’s stripes if you wanted to. But these are trivial conquests to a soul so saturated in the azules of our oceans, the flash of our stars, the tunes of our voices, and the electrical flares of our minds.
You can, my friend, reckon the moon to rise when the sun is expected for your passion and dangerous excitement for life birth your ability to be.
at 1:48 PM

Email ThisBlogThis!Share to TwitterShare to FacebookShare to Pinterest
Labels: Poetry

Email ThisBlogThis!Share to TwitterShare to FacebookShare to Pinterest
Labels: The RV Experiment